Making its first public appearance at the Goodwood Festival of Speed on Thursday, the latest Range Rover Sport was developed alongside the fifth-generation Range Rover, revealed last year, to ensure consistency within the Range Rover family but also, crucially, enough distinction between the two models.

Reflecting on the model’s impact, McGovern called the Range Rover Sport “the first of its breed in 2005, heralding a new vehicle with Range Rover luxury and sporting character”. He added: “It created a new vehicle segment and was the first model in an extended Range Rover family which paved the way for Evoque and Velar.”

The range-topping model – for now – is the twin-turbocharged 525bhp 4.4-litre BMW-derived petrol V8, which can accelerate from 0-62mph in 4.5sec. It will be a popular model, predicts Nick Collins, JLR’s executive director of vehicle programmes. “V8 demand is very strong at the moment,” he said. “There seems to be a split between big petrol engines and EVs.”

The new plug-in hybrid is expected to be a strong seller, too. In its most powerful form, it uses a 3.0-litre six-cylinder Ingenium petrol engine with a 141bhp electric motor, powered by a 38.2kWh battery, for a total output of 503bhp. It completes the 0-62mph sprint in 5.4sec and delivers 70 miles of EV range and CO2 emissions of 18g/km. Combining its petrol and electric reserves, it offers 460 miles of range.

The initial line-up is completed by a number of 48V mild-hybrid options, which use either a P400 straight-six Ingenium petrol engine or six-cylinder D300 and D350 diesel powertrains.

Two important models will arrive later: an electric version will come in 2024, around the same time as a zero-emissions variant. A Range Rover SVR is also confirmed but Land Rover isn’t divulging more details. “It’s in the programme. Customers won’t be disappointed,” said Collins.

While the SVR will be powered by the V8, the electric model could use a drivetrain sourced from technical partner BMW, such as that found in the top-rung BMW iX M60, which makes 611bhp and 811lb ft.

The new Range Rover Sport sits on JLR’s flexible mixed-metal architecture, known as MLA-Flex, which is also used by the Range Rover. The firm claims it has 35% higher torsional stiffness than the outgoing model, which lays the foundation for a number of chassis technologies all specially tuned for the car.

Collins said: “The MLA architecture and the latest chassis systems come together to deliver… the most engaging and thrilling Range Rover Sport ever.”

The model’s Dynamic Response Pro uses a 48V electronic active roll control system, capable of applying up to 1033lb ft of torque across each axle to offer “new levels of body control and cornering composure”, said the firm.

It works hand in hand with the latest-generation Dynamic Air Suspension, which introduces switchable-volume air springs for the first time. For best responses, the car monitors the road ahead using navigation data to prepare for upcoming bends.

The Range Rover Sport is now available with all-wheel steering, which, along with torque vectoring by braking and the electronic differential, should mean improved cornering agility. The steering system enables rear-wheel steering of up to 7.3deg out of phase with the front wheels to achieve better manoeuvrability at low speeds, as well as turning in-phase for improved stability at high speeds.

The model, which has Land Rover’s latest Terrain Response 2 system for off-roading, introduces the brand’s new adaptive off-road cruise control. Drivers can select one of four settings and the system adjusts the speed accordingly so the driver can focus on steering.

As with all Land Rover models, the new Range Rover Sport is an evolution of the outgoing model in appearance, keeping its short overhangs and steeply raked windows at the front and back. It has a 75mm-longer wheelbase than previously to improve rear leg room.

Chief exterior designer Dominic Najafi highlighted three fundamental elements to its design: a roofline that ‘accelerates’ down to the rear; a so-called waistline that is a continuous loop around the car; and a lower part that follows through and kicks up at the back.

He said: “It has a seamless finish from body to glass and the body side is very smooth. It’s more sophisticated than the outgoing Range Rover Sport.

“At the rear, we’ve moved the numberplate down to give a cleaner surface than before. Even the graphics on this car are harmonious. We don’t want anything to stand out. It’s a very modern approach.”

Digital LED lighting units at the front, the slimmest ever fitted to a Land Rover, create a daytime-running light signature. At the back, uninterrupted LED light graphics introduce surface LED technology to a production vehicle for the first time, claims Land Rover.

The high centre console rises up into the dashboard, which has a 13.1in curved screen that uses JLR’s Pivi Pro infotainment system, plus a 13.7in driver’s display. It has over-the-air updates, wireless Apple CarPlay and Android and Amazon Alexa capability. 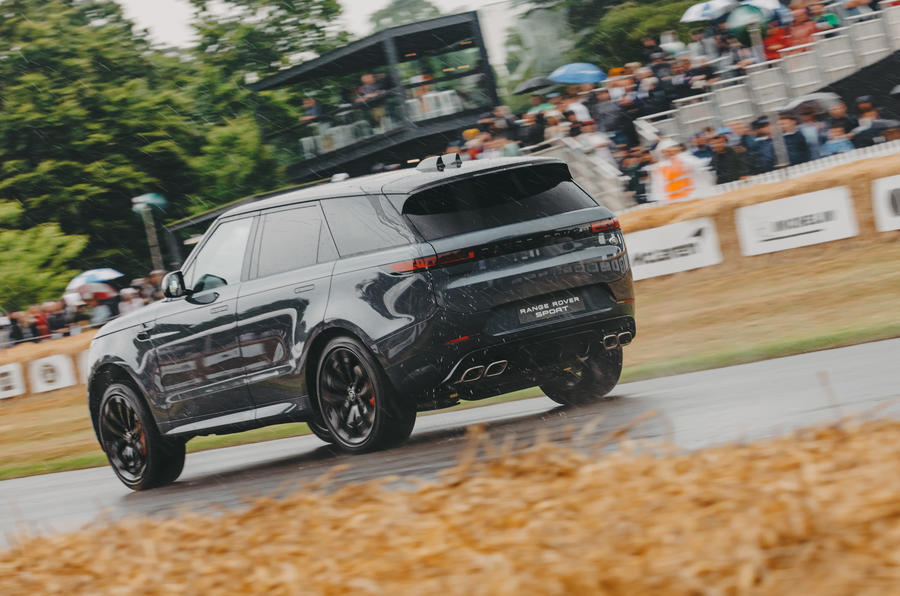